Prior Authorizations: The Saga Continues For Providers

A SPECIAL REPORT ON PRIOR AUTHORIZATIONS

UnitedHealthcare is putting another kink into their prior authorization policy. The policy starting November 1 in most states will not pay for unplanned surgeries in an outpatient hospital setting unless it determines the site is medically necessary. The “site-of-service medical necessity review” will apply to over 1,100 medical codes  from eye surgeries, biopsies, colonoscopies, inserting a pacemaker or heart catheter, as examples.

CEO Dirk McMahon said, “There is an opportunity to provide more hip and knee replacements in ambulatory centers, which can cost 50% less than in traditional settings with comparable or better safety and quality. UnitedHealthcare is “rapidly expanding this approach to additional high-cost services,” while also taking a similar approach to imaging and the administration of specialty drugs.” 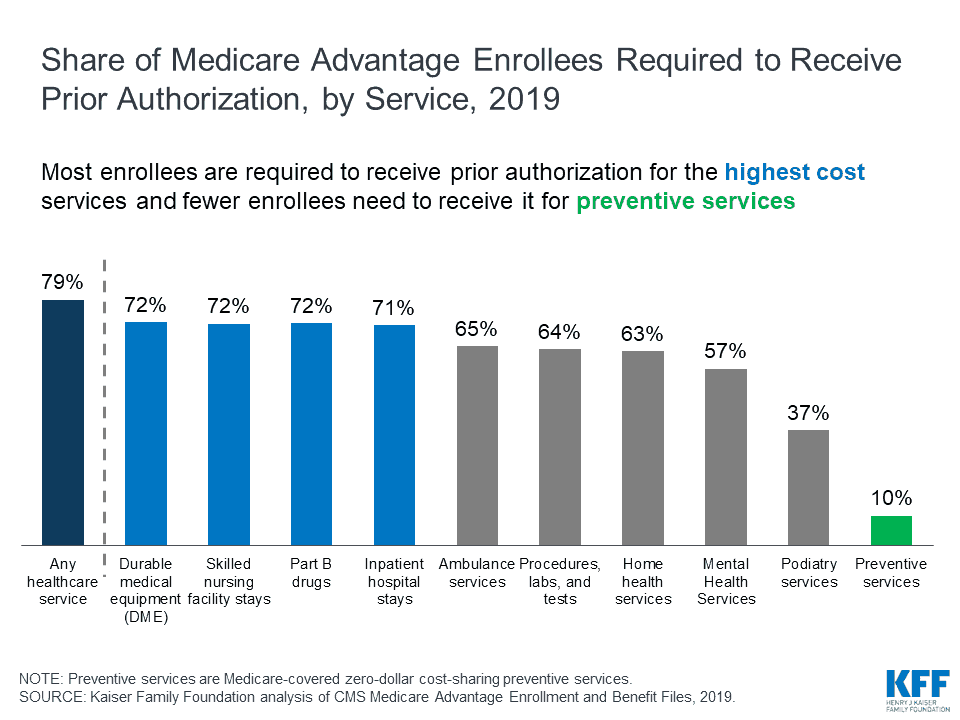 The Plot Thickens for Providers

Physicians Challenged by Prior Authorizations

Prior authorizations take time away from patients and interject a third party into the doctor-patient relationship. There are many frustrations with prior authorizations, but the time spent getting payer permission is a common thread among all doctors. The average practice spends more than 15 hours per week total on them.

The Time Spent on Prior Authorizations in 2018

33% of respondent said feeling as though the payer is telling me how to do my job/what’s best for my patients.

For providers, things are not looking-up any time in the near future. The enrollment in Medicare Advantage plans is growing rapidly. In 2019, about 22 million beneficiaries  are enjoying these plans. The Congressional Budget Office (CBO) projects that the share of beneficiaries enrolled in Medicare Advantage plans will rise to about 47 percent by 2029.

Facilitating the process of gaining health plans’ approval for medical treatment has grown to be one of the biggest frustrations for physicians in group practices, said Robert Tennant, director of health information technology policy for the Medical Group Management Association at its annual conference held in New Orleans.

Some 83 percent of respondents to a recent MGMA survey cited prior authorization for medical services as their No. 1 burden, Tennant said. And, another survey suggested that 90 percent of 1,000 physician respondents said the process is getting worse.

The MGMA executive cited data that 182 million prior authorization transactions occurred in the medical commercial market last year. Of those, 51 percent are handled using manual processes, such as phone calls, fax or mail. Another 36 percent are partially electronic, such as when a group practice queries a health plan’s portal to make a prior authorization inquiry. Only 12 percent are handled using the HIPAA transaction code set, even though “it’s been around for more than a decade,” Tennant noted. 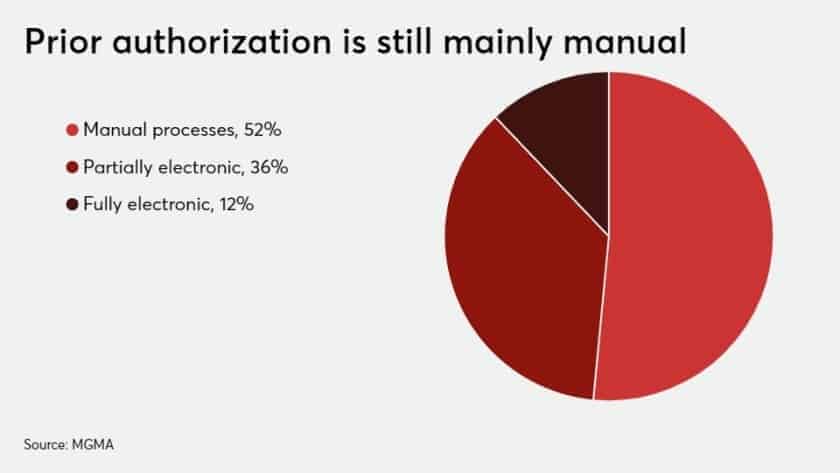 A new survey by the American Medical Association shows the challenges to physicians. AMA Chair-elect Dr. Jack Resneck, Jr. said, “the processes are lengthy administrative nightmares of recurring paperwork, multiple phone calls and bureaucratic battles that can delay or disrupt a patient’s access to vial care.”

The survey found medical practices average 29.1 prior authorization requests per week. Processing those requests takes an average of 14.6 hours per week. With those administrative tasks to tend to, 34% of physicians said they rely on staff to work solely on data entry and other manual tasks connected to prior authorization.

The Real Cost of Prior Authorizations

The truth is although prior authorizations has been an issue among healthcare providers for many years, little is known about the cost, either to individual practices or the healthcare system as a whole. In 2009, one study estimated that on average, prior authorization requests consumed about 20 hours a week per medical practice: one hour of the doctor’s time, nearly six hours of clerical time, plus 13 hours of nurses’ time.

A study by Health Affairs further revealed that when the time is converted to dollars, practices spent an average of $68,274 per physician per year interacting with health plans. This equates to $23 billion and $31 billion annually! Prior authorization ultimately ends up costing the health care system more than it saves. 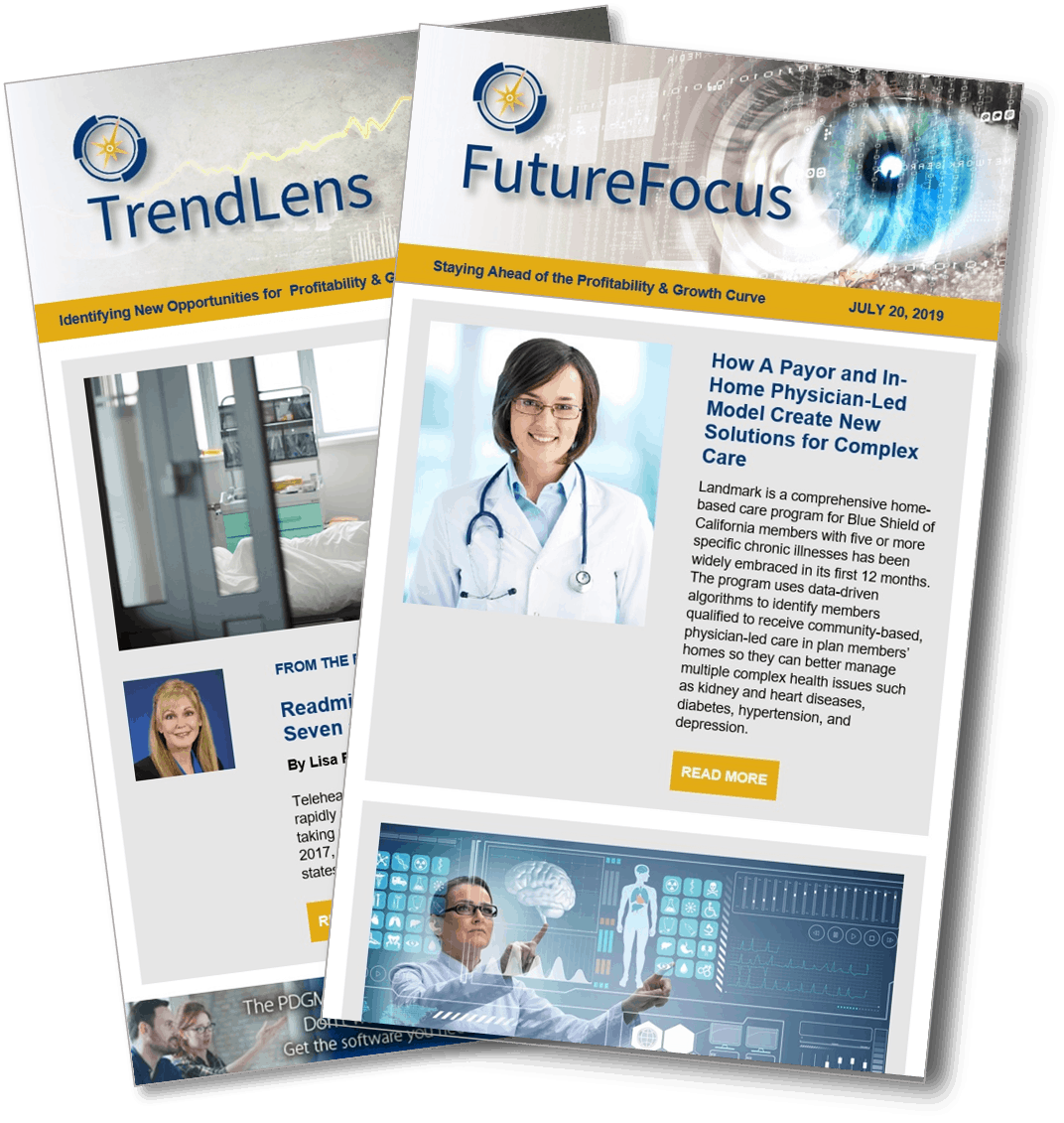